1. How did you get into web design and how long have you been doing it?

I've been building websites professionally for just over three years. I was finishing up two bachelors degrees in Civil Engineering and Computer Science while building some technically-advanced, visually-ugly websites for some local non-profits. The websites impressed my now-coworker Daren, and the rest is history.

I was actually pretty into building websites when I was a kid. I stopped doing it for a while, for whatever reason, but I really enjoyed having that amateur experience from way back when and being able to compare it with the huge developments that have been made in the field.

2. Are you a freelancer or do you work for an Agency?

I primarily work for the Saskatoon - and Calgary-based Territorial, but I also freelance, solving interesting MODX or advanced frontend issues.

3. How long have you been using MODX?

I've been using MODX for three years, ever since the days of 0.9.6. It was a good version, but this 2.x series seems like it's a better fit.

4. What did you use before MODX?

Interestingly, I started on MODX as a CMS. Prior to it, I was rolling my own.

5. How did you learn about MODX and which was the deciding factor to make it your CMS of choice?

Another developer at my company was using it, and he made me a convert. I was skeptical in those 0.9 days, but the 1.x release sealed the deal. After using Evolution for a few months, I had the opportunity to do my first work with Joomla and Wordpress. Let's just say I've tried to keep a 10ft pole between me and those CMSs ever since. Drupal and I are kind of friends, but we wouldn't really hang out outside of work. I haven't done much with other CMSs, but hopefully I'll have the opportunity in the future!

6. How difficult was the learning curve for MODX?

It's been an interesting curve. It was really straightforward to hop into it and build a simple website using chunks, snippets, etc. As I got better, I slowly uncovered more and more of MODX's functionality. I wish that I'd gotten into the API earlier, though -- you can do some pretty rad things with it!

7. What OS and applications do you use for web development?

I'm a new mac user! I bought a souped-up macbook air a few months ago and I ain't lookin' back. I finally found an IDE that speaks to me: PHPStorm. We're attached at the hip. I also use Transmit, Tweetdeck, and a bunch of those Adobe programs.

8. What project management tools do you use?

We use Basecamp, internally. It does the trick!

9. Do you have a workflow to start a MODX project?

Sure do. We put a lot of work into the predesign stage of our projects and get all the content, strategy, and requirements to the 100% point. That way, we get to the development stage and we're as efficient as possible. I typically mark things up first, skip to the JavaScript because it's fun, then procrastinate until I absolutely have to do the CSS. Although, LESS has been changing my life, and I'm starting to like it again. Hmm. Interview me again in six months.

10. Which are your favorite MODX extras and why?

Oh boy! Here are my pretties:

VersionX: I only have to use it occasionally, but when I do, it blows my mind.

LessCSS: This is to CSS what jQuery is to JS. Whenever I download the package, it says there are only about 120 downloads. I swear all 120 downloads are me.

MIGX, phpthumbof, getResources, and TinyMCE are such staples that I essentially consider them part of MODX core.

Anyway, these six extras are used in all of our sites.

11. What is Documentation Friday and what motivated you to do this?

I accidentally started #documentationfriday. I had just started using MIGX, and it blew me away with how easy it made a few tasks. Unfortunately, it took me a while to set it up, due largely in part to the language of the documentation surrounding it. To those unaware, it was produced by Bruno in Germany. I was really stuck by the quality of his work and felt really privileged at the opportunity to help, being a native English speaker. I was particularly struck by a sense to give something back for his extra, so I felt like helping introduce others to it would be a good way of doing so. I learnt quite a bit about the extra while I was rewriting the documentation for it.

Over the next few weeks, I decided to keep at it to keep learning. Documenting is great for learning -- most issues are small enough that you can go in, learn the problem really well, and then fix the documentation issue. I've learned a lot and I'm happy that people are benefitting from my new-found knowledge. Also, I've been meaning to contribute to the MODX project for so long, but git can be a scary place to the casual developer, especially when much of the work I perceive needs to be done could be quite heavy PHP work. It also makes me happy that I've finally found a way to effectively contribute to this open-source project!

12. What features would you like to see implemented in MODX?

13. What other hobbies do you have?

I'm obsessed with cycling: I have two bikes now: El Taco Noire and The Other One.

I've been known to backpack, hitchhike, and embark on other miscellaneous vagrancies. Yoga, canoeing, and that other outdoor stuff is fun, too. I'm also dealing with a boardgame addiction.

Benjamin Marte is a Front End Developer with more than 10 years of experience creating interactive multimedia experiences both online and offline. He currently works as a Senior Front End Developer at Wolters Kluwer. He's the creator of CMSTricks where he blogs about the MODX Content Management System and tweets with a focus on MODX and Web Development under the handle @benmarte

This thread has been closed from taking new comments. 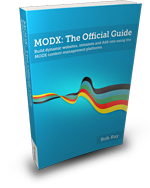 Everything you wanted to know about MODX, and then some. Buy Now!